“You are witnesses of these things. And see, I am sending upon you what my Father promised; so stay here in the city until you have been clothed with power from on high.”

Then he led them out as far as Bethany, and, lifting up his hands, he blessed them. While he was blessing them, he withdrew from them and was carried up into heaven. And they worshiped him, and returned to Jerusalem with great joy; and they were continually in the temple blessing God.” (Luke 24:48–53 NRSV)

The Interplay between Presence and Absence

Why should Jesus leave at all? Why have all these appearances at the end of John preparing his disciples for his departure, or this scene of Jesus being mysteriously whisked away in what is classically called the ascension?

I think it’s because his leaving was just as important as his coming.

Jesus knew that if he didn’t leave right there would be no way to sustain the movement that he began. He knew that until he left, his disciples would just remain students; In his leaving they would become the teachers.

In the Gospel of John Jesus said:

“Nevertheless I tell you the truth: it is to your advantage that I go away, for if I do not go away, the Advocate will not come to you; but if I go, I will send him to you. (John 16:7)

But this is perspective, that it absence is as good as presence is a hard one to swallow in our day and age isn’t?

Our culture highly values presence. There are apps that you can use to log-in to stores, parks, and other locations you visit. There are plenty of ways to show photos from the places you travel and share them in ways that others feel like they are present with you on the trip. There are apps that measure your online presence and impact. And there is even an app called “presence” which monitors motion in your home while you are a way.

Could it be that presence is held almost to the point of idolatry? We prize availability far more than unavailability.

Otherwise, why is it so hard to take a day off in which you are completely unavailable?

Think about this: Why are there not a slew of “unavailability apps?” Apps or other tools that help you to be unavailable, off, or resting.

The Gospels even tell us that Jesus regularly withdrew from the crowds.

So then are there times when absence is good or even more desirable over presence?

Henri Nouwen, in his book “The Living Reminder,” writes that not only is absence important, it is necessary to sustaining human life.

Drawing on Elie Wiesel, the nobel-peace prize winning Romanian-born Jewish writer, professor and activist, Nouwen writes that, “It is not simply from a friend but from the memory of a friend that sustaining power flows” (37). 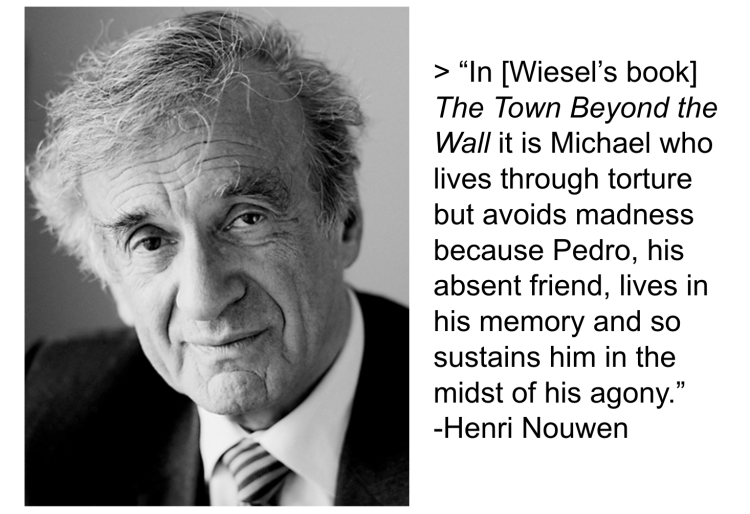 It isn’t just the presence or the availability of another that creates meaningful relationship, it is also the sustaining power of memory that can impact us through life.

“Just as the memory of past wounds can prevent us from repeating the evil that wounded us, so also the memory of love can nurture us in our day-to-day struggles…memory not only connects us with our past but also keeps us alive in the present” (37-38).

Think about your loved ones who are not here with you. Those memories of love have their own kind of presence to them don’t they?

Dark Side of the Moon 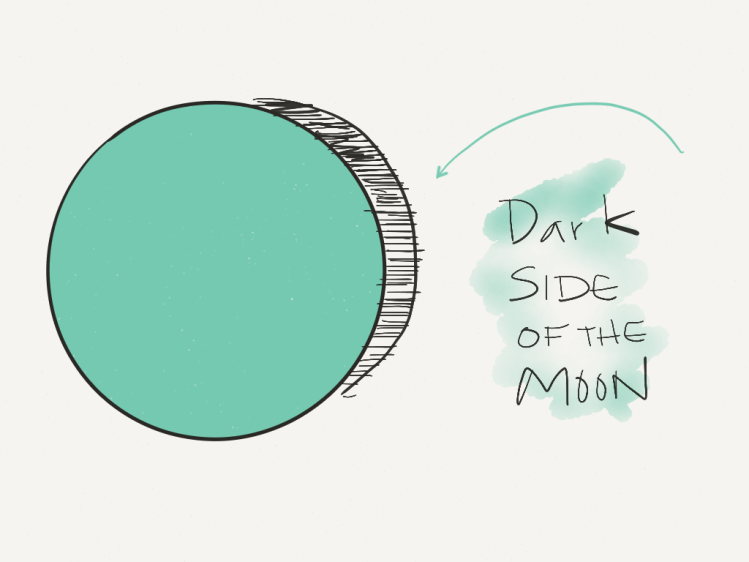 A couple years back when I was writing about the suicide of my step-father, Bernie, I spent a lot of time listening to Pink Floyd’s “Dark Side of the Moon,” which was one of his favorite albums. Ironically, the literal dark or far side of the moon turned out to be a kind of metaphor for my own wrestling with Bernie’s death.

As you know, because of what is called tidal locking, the moon
“rotates on its axis in the same rotational direction as Earth (Wikipedia)” so that the dark side of the moon is permanently unable to be seen from the Earth’s surface. Even though it is always there, it is never present. This is one way we might think about absence having its own kind of presence.

And it was realization that partly helped me in my own healing around my stepdad’s death.

If you were to know Bernie in his life you would know just how difficult it was to have a relationship with him. He wasn’t typically a very pleasant person to be around. His anger would get the best of him and his views on the world, God, and politics were so damaging that I think they were part of what drove him to his premature death. His presence wasn’t something you necessarily looked forward to all that often. And yet, Ten years after his death, as I began to approach the memory of Bernie, I was able to begin to start having a new relationship with him. What was once a very empty absence became for me a memory of love.

“In absence, from a distance, in memory, we see each other in a new way. We are less distracted by each other’s idiosyncrasies and are better able to see and understand each other’s inner core.”

New stories and memories can emerge in the absence of someone. And if even difficult people, like Bernie, can – sometimes – be returned to a memory of love in our hearts, how much more powerful do the memories of those we already love?

The ascension of Jesus teaches us memories of love can become a very sustaining way forward for us in times of leaving. And these memories can become part of our oral tradition, part of the narratives we tell generation to generation that work to not only sustain us as individuals but the rest of our community.

But we also know that not all absences are good. Some absences are not just painful but reminders of painful presences and painful separations.

Think about the absence a daughter feels while playing on a baseball league who keeps looking back to see if her Dad came to watch. Just like every other time, he said he’d be there, but again he didn’t show up.

Compare that to the absence a daughter feels after that same ballgame but where her dad showed up and now she is watching her dad drive off.

Both are absences have a quality distance and longing, but one absence is far better to experience than the other.

“There is an enormous difference between an absence after a visit and an absence which is the result of not coming at all. Without a coming there can be no leaving, and without a presence absence is only emptiness and not the way to a greater intimacy with God through the Spirit.”

My friend, Jason Minnix says there is a difference between pregnant and empty absences.

Empty absences are of the first kind. The kid waiting for mom or for dad but who never show. The lover who knows what betrayal feels like. The friendship that shatters over unresolved differences. They are hollow because they are hollow, unresolved, or wounding. 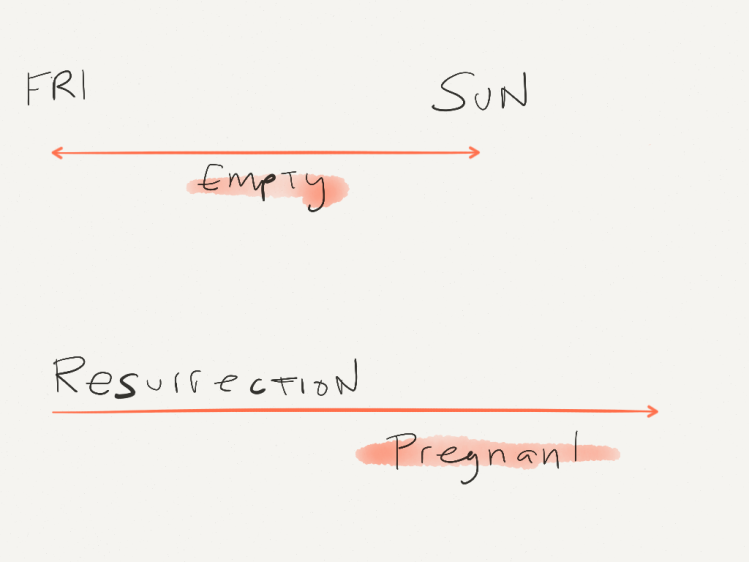 In the Gospel account, an empty absence is the time between Good Friday and Easter Sunday. The shock of Jesus’ death and his absence is felt like a gaping and fatal wound to the disciples. This is the time Christian say, “the world stood still.”

But if the days between Good Friday and Easter Sunday are absence than what follows from Resurrection is what we might call a pregnant absence.

“When the Spirit of truth comes, he will guide you into all the truth; for he will not speak on his own, but will speak whatever he hears, and he will declare to you the things that are to come.” (John 16:13).

In Jesus’ absence, the disciples are called to a new kind of relationship with God and the world. They are to move from a community marked by the leadership of Jesus to one that is shaped by the presence of his spirit and the memory of love.

They are no longer simply “disciples,” now they are the ones making disciples.

And so Jesus teaches us not only in coming but also in his going, the way he left, and what memories he leaves behind.

This pregnant absence helps to give me some handles to think about my own life, my own losses and my own practice of leaving.
When I leave here or anywhere, I want to leave a pregnant absence, one that leaves only a memory of love behind.

So I ask myself, “Am I living and relating to others in such a way that things are better after I am gone?”

Three Ways for a Pregnant Absence

Reviewing the ascension of Jesus in Luke 24 there are three things I find helpful in thinking about the practice of leave-taking.

1. Live in a way that when you leave there are meaningful experiences and relationships behind you.

A pregnant absence is marked by meaningful experiences, relationships and connection. The resurrection of Jesus affords a pregnant absence because of what they experienced together, how they related to one another, how they helped one another was meaningful and rooted in love. “You are witnesses of these things.” You have witnessed them with me. You have done them with me. Now go out and do them.

As St. Francis once said, i have done what I have come to do, now you must do what is yours to do.”

“I have done what I have come to do, now you must do what is yours to do.”

A pregnant absence is also marked by blessing. Luke records that lifted up his hands and blessed them. That means he “invoked divine favor upon” and “ask God to look favorably on” them. Rather than just slipping out the back door, or waving as he rode off, he marked his leaving by a ritual.

3. Leave in such a way that people are redirected back to the worship of God.

The last clue to a pregnant absence is marked by a return to silence. Finally, he “was carried up.” Finally, Jesus left. Nouwen says, “We have to learn to leave so that the Spirit can come.” There must ultimately be, just like what we see here in the disciples, a return to silence and worship. A pregnant absence directs us back towards worship of God.