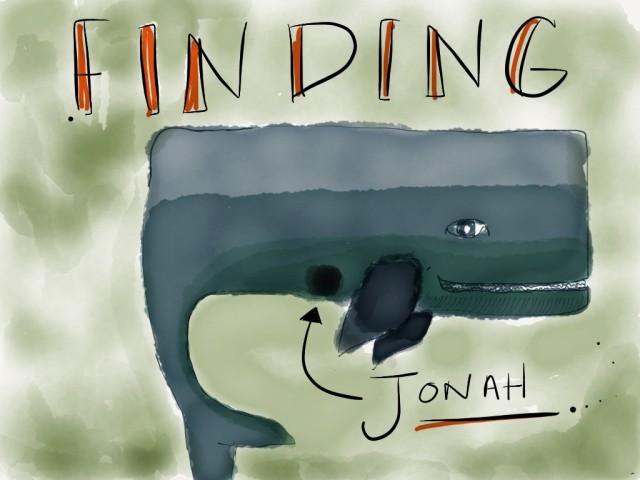 Jonah is an old story, and it is even an over-told one. We so used to it being told from the perspective of Jonah as a vegetable, or other children’s stories that it seems too simplistic to be of use to us. Either that or we are caught in debates about whether it is a factual story or who are the wicked “Ninevites that need to be evangelized that” it can be difficult to find where Jonah fits for us today. But the story of Jonah – I like to think of it like a parable similar to a parable of Jesus’ – is something that is neither simple nor about evangelism, at least not in the way we have tended to think of it.

So what does it mean to “find Jonah” today?

I have, for much of my life, identified with Jonah. I get the sentiment of wanting to go in the other direction of the call of God on my life. I’ve told you the story about when I was first called into ministry when I was in high school and my first response was “No Way on Earth would I do something like that.” I told God, “You’ll have to make me actually want to do that, if you want me to become pastor.”

But there is so much more to the story than Jonah simply being a “bad prophet.”

For one, the story of Jonah folds in half and basically repeats itself.

* “Now the word of the LORD came to Jonah son of Amittai, saying, “Go at once to Nineveh, that great city, and cry out against it; for their wickedness has come up before me.” (Jonah 1:1–2)

* “The word of the LORD came to Jonah a second time, saying, “Get up, go to Nineveh, that great city, and proclaim to it the message that I tell you.” So Jonah set out and went to Nineveh, according to the word of the LORD. Now Nineveh was an exceedingly large city, a three days’ walk across.” (Jonah 3:1–3 NRSV)

Jonah’s life turns around these two experiential moments with God.

So one way we find Jonah useful for us would be in terms of what Richard Rohr calls the first and second half of life.

Toward Tarshish: First and Second Half of Life

In the first half of life, Jonah gets a command and could be viewed in a juvenile and regressive state – he reacts out of self-interest and moves in the other direction. This movement is a fleeing away from the presence the true self, which is found in response to God.

How often have you pled for a sign of clarity around what you are to do with your life, or this or that situation, or in this or that relationship, all the while, if you’re really honest about it, you already know the direction at a gut level and really just don’t want to do it?

I can identify with this wholeheartedly. Maybe Jonah justified his trip to Tarshish as, I can be a prophet anywhere, I can serve God where ever I am, so what’s the real difference between Tarshish and Nineveh?

In the first half of life we’re building up the surfacey things. We’re mostly interested in our “image” and “approval” stuff. We try to make things go our way and avoid anything that might challenge us unnecessarily.

Then comes the second half of life which is often brought on by some form of suffering, questioning, loss or other form of disorientation. When everything is up for grabs, and we have no choice but to go deeper into our relationship with God and with ourselves.

The second half of Jonah’s “prophetic” life comes after his suffering and his dislocation in the belly of the whale. In the second half of life, Jonah leans into his call, his identity as a prophet, and responds to the call of God upon his life.

In the first half of life we are worried about the how things look on the outside, we spend our time building the outer part of the house: get a spouse, have kids, live in certain neighborhood, dress a certain way, get the right kind of job, get degrees, etc. It is in the second half of life that we learn how to live in the inner part of the house. We learn about what is fundamental to life and what is extra. Spiritual growth is always about doing more with less. Wealth is a first half of life object, simplicity is the goal of a second half of life.

In the second half of life we can come to say in the words of the great philosopher, “I was older then, I’m younger than that now.”

And while the “second half of life” tends to reflect a more mature existence, it struggles of its own. I like that we find Jonah at the end of the story – which we will get to in a couple weeks – wrestling with his anger, hurt, resentments and his questions about who God is really.

Even suffering and growth and maturation do not keep us from human frailty and dislocation.

This is something I find about Jonah to be really helpful.

And there are other ways I connect with Jonah as well.

Like Jonah, I am afraid that I will be swallowed up by a whale, lost among the countless masses, just another number, living a life that is of little meaning or value to others. I am afraid of those parts of me that would rather die than do what it is I am called to do.

Like Jonah, I am afraid to step out into the unknown, to trust God or others, and know that I do not have to know or understand in order for me to participate in God’s work. And often my “knowing and understanding” can get in the way, because these are ways I try to control outcomes.

In fact, I like that Jonah, unable to do it himself, asks his shipmates to throw him over into the sea. This is a trusting in community, when one is unable to carry it out for himself or herself. His Pagan shipmates are the kind of clear-eyed compelling community we might hope and expect the church to be.

Like Jonah, I struggle to forgive, especially those who have hurt me. Those who have done me wrong and who do not in away way “deserve” my forgiveness.

Like Jonah, I realize that I too can remain silent when I need to speak up. Especially, when as in his case, I am being asked to “speak truth to power.”

The thing with the Jonah story that often gets missed is that Jonah is not being called to “evangelize” the Ninevites, as though Jonah represents the Christian Church and Nineveh represents Pagans, or idol worshippers or basically anyone evil we wish to dismiss.

No, the actual power dynamics in this story are far more challenging.

In Jonah’s time, Israel has been crushed and enslaved by the Assyrian Empire and guess where the capital of Assyrian was: Nineveh? Jonah is called to speak truth to power. Jonah, an individual prophet, captured and oppressed by empire is asked by God to walk into the capital city and tell them all what they’re doing to the people is unjust and God is going to bring their empire for it.

No wonder Jonah goes the other way. In fact, it makes a lot more sense that he’d run away if you think about it like that. He may have run in the other direction so he didn’t look like a traitor to his people. He may have run away because he didn’t even want to give his oppressor the chance to turn around, operating under the assumption “they deserve what they will get.” He ran in the other direction for fear of his own life. And he ran away because, as we lean in chapter 4, Jonah’s idea of God was deeply challenged and troubled by Jonah’s experience of God. It’s one thing to have ideas about who God is, what God might want from you in your life or what “issues” God stands for, and it is quite another to experience God for yourself and to have all of those things challenged or completely melted away in the face of a challenging call like Jonah’s.

It is in Jonah’s “second half of life” – after his tragic “death and resurrection” from the sea, that Jonah is “born a second time” able to begin to understand the complexities of his encounter with God and “set out and go to Nineveh.”

This kind of speaking truth to power, this call towards repentance that he makes upon his oppressor requires hard internal work that I know feels almost impossible to me.

Finally, Like Jonah, I realize that it is much easier to remain passive in my spiritual life than it is to participate. Jonah’s first half of life could be characterized by non-participation, by a passivity, where he not only withdraws but goes to great lengths to run the other direction.

It is a wonder the great lengths we go to, the amount of energy and effort we can put into moving in the opposite direction of our true self. We talk about wanting to be a compelling community, but is that something we are truly invested in, committed to, or do we find ourselves putting just as much effort moving away from spiritual health?

When we find Jonah on his way to Tarshish, we must ask what is my Tarshish?

What is that practice, that place, that habit, that takes me away from my true self, from participating in spiritual community, from going deeper into the Spirit of God? We can’t leave this to chance. In this powerfully influential time we live, this is not something we can remain passive about.

Jonah offers for us a picture of the inner landscape, what it means to wrestle with one’s own life, one’s “calling,” one’s commitment to community and to “Other’s,” especially others who are dangerous. Jonah offers us a picture of reconciliation in the midst of a very challenging situation, and offers us a dialogue of one prophets disagreement with God, and God’s response to him that is a call to extend love and mercy all of God’s creation.

Not bad for a children’s story.

* What are the places where we are moving in the opposite direction of the true-self?

* Or the call of God on our lives?

* Where is Jesus at work, leading us towards participating in creating a more justice community?