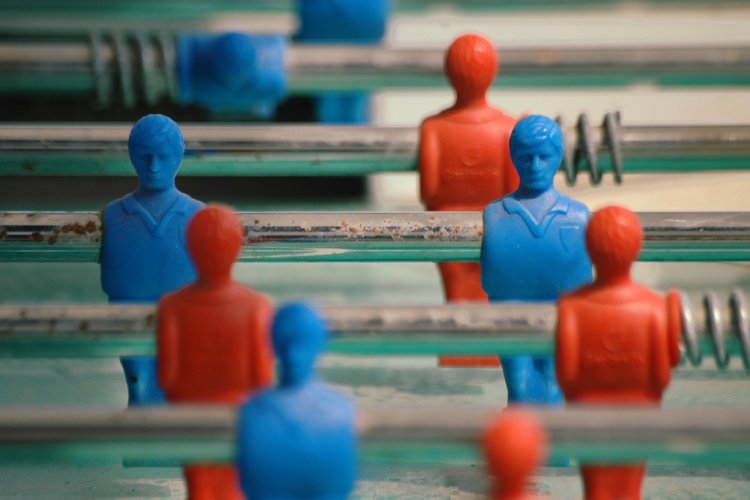 “So when Pilate saw that he could do nothing, but rather that a riot was beginning, he took some water and washed his hands before the crowd, saying, “I am innocent of this man’s blood; see to it yourselves.” Then the people as a whole answered, “His blood be on us and on our children!” So he released Barabbas for them; and after flogging Jesus, he handed him over to be crucified.” (Matthew 27:24–26)

The Story is not rigged

One of the ways we have heard these last events taught is that it all had to happen this way, but I want to raise the possibility that the game wasn’t rigged for Jesus. That these final events weren’t “destiny” as we often suppose, but rather the outworking of certain mechanism within human society that Jesus sought to unmask.**

And here’s why I think this is important.

Not only does this image make the whole thing seem like one divinely twisted game of chess, but I don’t believe it reflects our personal experiences with God. It also makes it really difficult to pull new meaning out of these stories and hear them in any other way.

Because if it’s fixed then what more is there really to learn about? You are either okay with it and accept it, or you’re wrong.

But what if things didn’t have to go down this way? Is there another way, or more than one way, to think about Jesus’ life, death and resurrection? What would need to change to make space for some new ways of hearing this story?

Here is a simplification of the standard story we hear about Jesus’ death:

There’s this God makes the world but almost immediately everything goes to pot. That’s because there’s this thing people sometimes call the fall, and sin and nakedness, [nakedness, is of course the worse, especially if you haven’t been able to get out and exercise for a little while,] and because people have disobeyed God – once, a very long long time ago that set off this chain of events – the only proper response from God is sheer anger and wrath to bring an end to the whole thing. The only way to get God to finally calm down from his hissy fit is that somebody needs to die, but having a regular human being whose already full of all this black stuff called “original sin,” won’t appease God’s fury, so only a sinless person dying could make God happy. So God has to send his own kid down to do the dirty work. Now once Jesus dies, God can finally get over his fit. But there’s catch. God says, now that I have gone to all this trouble and had my son killed, you better behave! And if you don’t behave, then you’re really going to pay and you will pay with eternal torture!

Now this is a rather version of the bleak story!

It doesn’t make God out to be all that inviting, and it’s not really very flattering to us either. But when you lay it out like this, even if it is a bit simplified, I think it sounds hauntingly familiar.

Some of the key problems with this version are that it it makes God out to be violent, a divine child-abuser and totally into blackmail.

God from this version of the story says to all of us:

“Look at everything I’ve done for you, and if you don’t behave then you’re really going to pay!”

I mean this is the story a lot of us grew up with. And it’s pretty straight forward and it’s so temptingly simple that it’s really hard to let go of or imagine that it could happen any other way. But then it’s no wonder we don’t trust one another and we don’t trust ourselves, and it’s no wonder people have a hard time connecting with God. Because to be “saved” in this version of story is really to be “saved from” God.

And beyond this, as a parent of kids who quite possibly push me beyond any limits I previously thought I had, this image of God as father doesn’t reflect my own experiences of loving my children. I don’t care how many times one of my kids takes a piece off a fruit tree after I tell them not to, I would never ever destined them for an eternity of torture.

Am we more loving than God? Or is our story all messed up?

If this framework feels to you a little manipulative and contrived is there an alternative and if so, what difference would it make? When I realized that I didn’t have to believe this first version of the story in order to follow Jesus, love God and have faith, my world began to open up and I felt freer to be myself and trust that God isn’t out to get me.

I want to try to sketch out some of it for you now. But I also want to recognize that this is a work in progress, we need Sunday’s resurrection to make it complete.

Here’s the main point we can build off of:

“It is not humans who sacrifice to God (by killing the blasphemous transgressor), it is God who offers a sacrifice to humans.”

God has no need of appeasement, because God is not a wrathful God and has no interest in your torture. But God is so full of love that God in Jesus was willing to participate in our way of life even unto death so that he might reveal how the system is broken, because once it can begin the process of repair.

For one, the last few hours of Jesus’ life reveal some difficult truths about the lynchmob mentality deep within the human psyche.

James Alison recently said in a talk he gave that one of the best ways to motivate a crowd to do something is to turn them into a lynchmob over against a wicked other. We see this everyday in society. A lynchmob over here, and a lynchmob over there. Everybody’s trying to get their own lynchmob these days just to crucify somebody.

So we see in our Gospel account this morning a slow building up into a frenzy that begins at a dinner table and ends with a riotous mob. The Gospel tells us that they are shouting for this man’s blood, that they’ve been enraged over jealousy and want him dead.

The system of gears Jesus has jammed his body in the middle of so that the wheels stop turning is a system based on exclusion and rivalry over against others. What Jesus reveals is that our rivalry is encased in death. All desire to be defined over and against, to create in groups and out groups, to be stuck within the realm of judgement of others, refusing to see where God is at work in them, leads to death.

Sometimes, especially if you are in a vulnerable position in this society, it has lead to physical death. But it can also lead to mental, emotional and spiritual death of the ones doing the violence.

And this system of exclusion that feeds off of the necessity of someone to blame or a scapegoat to appease itself. Jesus of course is the divine scapegoat for the Christian tradition.

But here’s the thing with scapegoats, so long as the angry mob can find for itself a someone else to blame it will never have to square with the reality that it is the problem and not the “victim.” In fact, Jesus reveals that it is the scapegoat who is the innocent one.

Scapegoats will always play for us the necessary role of obscuring our own truth.

Because Jesus is innocent, there can be no “victim-blaming” no refusing to accept the fact that this system is out for blood. But even more than this, the real power to bring down this need “glue of hatred” as my friend Jarrod McKenna calls it, Jesus is the forgiving victim, the scapegoat who returns from the dead to offer forgiveness to those who offered it for sacrifice.

This is an embodiment of everything we have learned about from the Sermon on the Mount, the subversive logic of love, the third way of nonviolence, and the refusal to live by bread alone, but to follow the way of Jesus in the midst of trials, suffering, and defeat.

Is it possible for humanity to live without needing some “wicked other” in order to exist? And what does that look like?

Could it be that what Jesus is up to is trying to reveal that God’s love is for us without the need for any blaming, or scapegoating, or any kind of us and them?

Whatever your limitations, your trials and failures, the sins that have plagued you, you’re already loved, already forgiven and being called back to your true self. I believe the Gospel story is the revelation that we are already being loved and forgiven in the midst of our limitations and complete breakdowns.

Could it be also that the Gospel is about what lengths love goes to wake us up, to begin pull us away from the mob, coax us out of that riotous behavior and reveal to us that there is a better way?

If the answer to these questions is yes, than salvation is not about being saved from the wrath of God, but rather being liberated from imaginations marked by death. Stepping outside the the choices of retaliation and victimization.

Salvation is a movement of freedom towards “a hidden wholeness,” toward who we are meant to be apart from the constant need to participate in a lynchmob over and against a wicked other. In fact, it is moving membership from a lynchmob to its exact opposite: the beloved community.

And because of this, Salvation is always threat to every oppression of every kind and is not always welcome or received warmly.

Friends, we are not stuck in roles, playing out destinies chosen for us long ago and far away. Nor are we little men in soccer uniforms with metal rods jammed through our sides forever determined to play an epic game of foosball between good and evil. Even the stories that we tell are not fixed. We get to decide who we follow, who we love, who we welcome and whose stories we lift up.

So that we can, as Early Quaker Dorothy White said, “Arise in the Power so that every Soul may swim in the fullness of Love.”